Bonnar’s second novel, coming in May 2022 from Oceanview Publishing 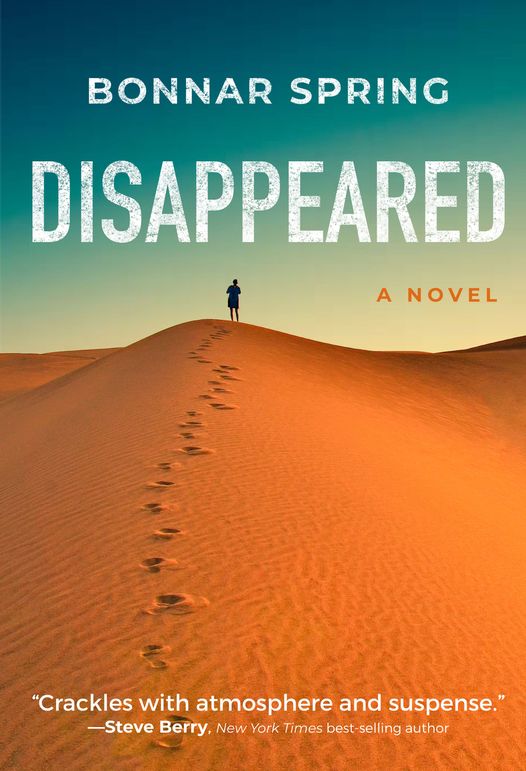 These two sisters are about to be permanently “disappeared”

Julie Welch’s sister, Fay Lariviere, disappears from their hotel in Morocco. Although she leaves a note that she’ll be back in two days, Fay doesn’t return.

Julie’s anger shifts to worry—and to fear when she discovers a stalker. Then, an attack meant for Julie kills another woman. Searching Fay’s luggage and quizzing the hotel staff, Julie discovers Fay’s destination—a remote village in the Saharan desert. Convinced her sister is in danger and propelled by her own jeopardy, Julie rushes to warn Fay.

By the time she reaches the village, Julie finds that Fay has traveled deeper into the desert. With a villager as guide, Julie follows—only to be stranded in the Sahara when the guide abandons her. Julie is eventually reunited with Fay—in a prison cell—and learns the reasons for Fay’s secrecy.

Although furious at Fay’s deception and weak from her desert ordeal, Julie knows they must work together. The sisters, ensnared in a web of dangerous lies and about to be permanently “disappeared”, pit their wits against soldiers and desert in a fight for their lives.

Perfect for fans of Tana French and Martin Cruz Smith

Disappeared is now available for pre-order at:

“Buckle up for adventure as Bonnar Spring’s evocative prose whisks you away to Morocco in this terrific—and harrowing—tale of resourceful women running for their lives in a foreign country. Trust me when I say that DISAPPEARED is one of the best books you’ll read all year. Absolutely riveting!”

—  Alan Orloff, ITW Thriller- and Derringer-Award winning author of I PLAY ONE ON TV

“You can feel the desert sand on your skin and the tension in your spine.  This one crackles with atmosphere and suspense from the first page to the last.  Described in two words?  Authentic and thrilling.”
— Steve Berry, NY Times award-winning author

“An American hero with a heart condition, the fascinating cities and deserts of Morocco, shadowy security forces, and a family needing rescue…what more could you want in this rousing adventure story? Spring has such a great sense of place and culture you feel like you’re right there with her memorable characters.”

Perfect for readers who appreciate a novel female protagonist, an “everywoman” confronted with an overwhelming moral dilemma and crushing physical danger. Luz Concepcion returns to Guatemala to murder Martin Benavides, the man who destroyed her Read more…